How does a hydroelectric turbine function and why choose to consult with our hydro turbine suppliers at Hallidays Hydropower International? There are many advantages associated with hydroelectricity. This renewable and clean form of energy employs water to generate electricity, so its environmental impacts are negligible when compared to more traditional methods such as the consumption of fossil fuels. Additionally, hydroelectric power is a more cost-effective solution; allowing poorer communities to afford its presence and reducing energy bills in general. One of the core components of these systems involves the turbines found within a plant.

Most people would have the basic understanding that when speaking about hydroelectric energy, it is in reference to the production of electricity through the use of flowing water. How is this actually achieved though? Fundamental to the entire process is a robust, efficient and relatively simple piece of machinery – the screw turbine.

The Basic Principle of a Hydroelectric Turbine 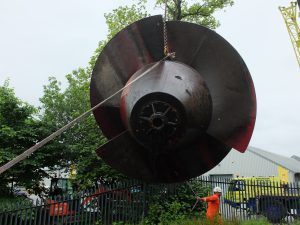 The primary intention of a hydroelectric turbine is to transform the kinetic energy of flowing water into a viable source of power. The cascading water that falls upon the blades of a turbine will cause it to turn. This turbine is subsequently attached to a generator; effectively converting mechanical motion into electricity. The most obvious advantage in such a situation is that this is an endless supply of power (assuming that the water remains flowing). Furthermore, it is quite easy to increase or decrease the power output based upon the demands of the end user. This electricity is then sent along to the customer through the use of transmission lines.

There are different size designations for hydropower plants which are somewhat misleading. For example, a micro hydro system is capable of producing sufficient electricity which could power a thousand homes in the UK which are considered average, in terms of power generated. Other terms in the hydro category range from mini, small or micro to medium and large, with different power ranges from as little as 0kW-5kW output, leading to well over 100 MW+.

What is the Archimedes Screw Turbine? 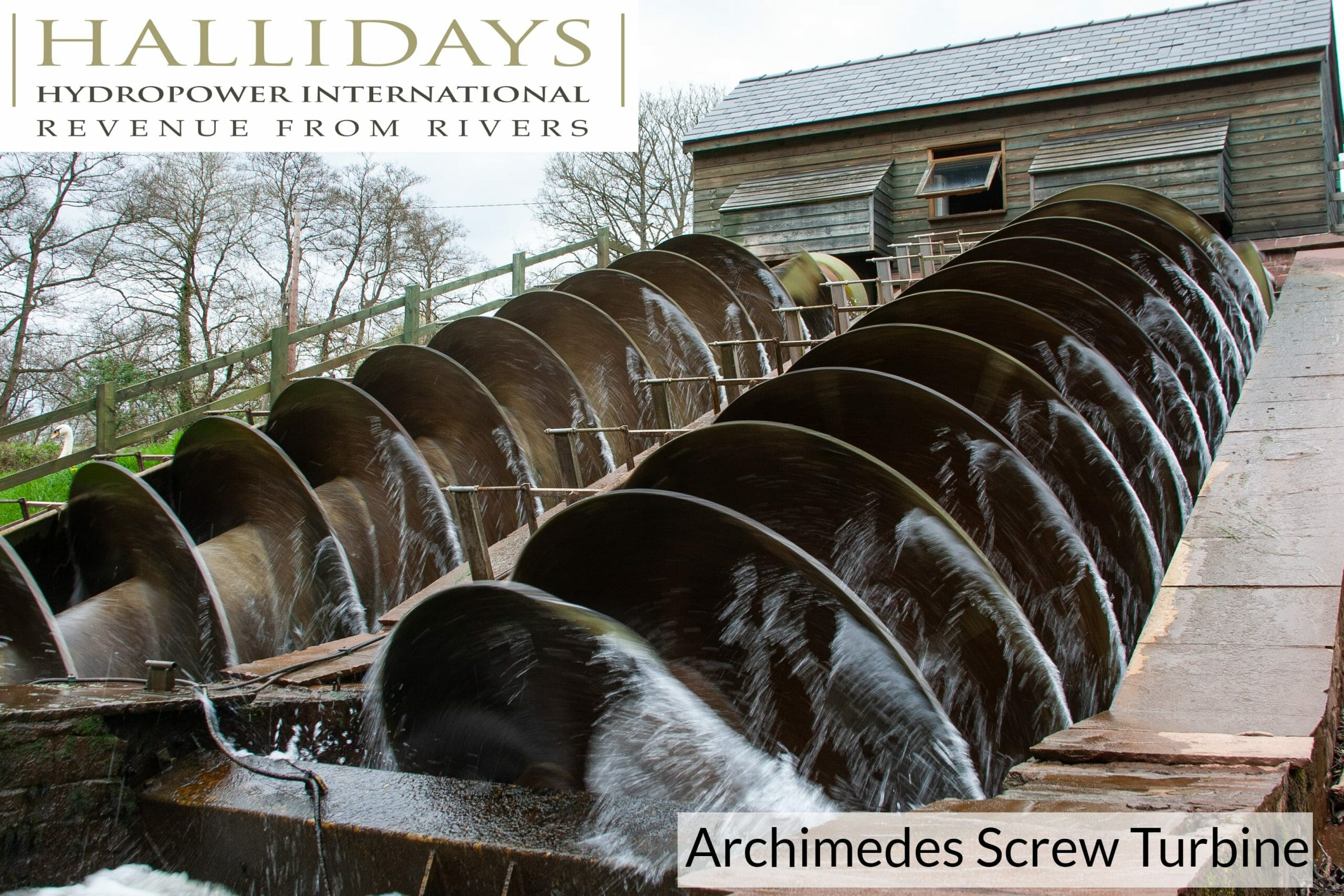 The Archimedes Screw is the name given to a variety of screw pump invented by Archimedes in the 3rd century BC and the physical processes involved in the mechanics of this pump provide the basis for the Archimedes Screw Turbine. As its name suggests, the screw turbine is shaped like a corkscrew. Running water flows through the spiralled structure, causing the turbine to rotate and this turning motion is essentially what produces electricity.

The design for the Archimedes Screw pump involved the application of energy to a screw in order to pump water from low levels to higher levels. The pump has been used successfully for generations. However, only recently has the concept of the screw pump been turned on its head. The mechanics of the Archimedes Screw turbine run in reverse: the fall of water from high levels to low levels turns the screw in order to produce energy.

The implications of this reversal are extremely positive. This form of hydropower provides an effective and inexpensive alternative to environmentally harmful methods of generating energy. It is amazing to think that generators have only been powered by a reversal of the concept of the Archimedes Screw since 1997. Since then, many enterprises have sought to make up lost time with relation to hydropower.

Where Are Screw Turbines Best Used?

Screw turbines work most effectively when installed in a riverway where the water is running from slightly higher ground, to slightly lower ground (low head/high flow). The structure is positioned at an angle so that water flowing downstream enters the corkscrew shape, travels down through the spiralling blades, and causes the turbine to turn and create energy. The water then runs off at the end of the screw and back into the river. The amount of energy which can be produced is largely determined by the speed and strength of the water flow and also by the diameter of the turbine in place.

Whilst the design of the screw turbine is incredibly effective, the blades do rotate at a relatively low speed. One innovation which maximises the efficiency of screw turbine hydro power systems, has been the implementation of an assisting gearbox. The gearbox ‘receives’ the energy produced by the rotating turbine, and then significantly boosts the speed that it outputs to a spinning cog at the other end. The resulting mechanical energy that is produced by this rapidly turning cog is then converted by a generator into consumable electrical energy. This enhancement of the system drastically increases the amount of energy created by the entire process, and makes an already fantastic design even better.

It is is often the case that the most impressive modern technologies are the result of applying different interpretations to to previous ideas. The development of the Archimedes Screw in the 3rd century BC had nothing to do with generating energy – rather it was concerned with using energy in order to pump water from low levels to high levels for irrigation.

The Archimedes pump was extraordinarilily successful and it has been used for centuries. However, in recent years the concept that the Archimedes Screw is built on has been re-evaluated. Instead of putting energy in as a means of manipulating the flow of water, modern minds have found a way to use the same basic piece of machinery to use the flow of water to actually generate energy.

The process of capturing energy in this manner is known as Archimedes Screw hydro power or hydroelectric power. … It is cost-effective, low maintenance and eco-friendly and it is currently being taken up by a host of businesses and private clients with access to running water, including low head sitess with low flow rates such aslike rural streams. This form of hydro power offers a great deal of potential on for industrial, commercial and domestic sites.

The Benefits Of Screw Turbines

Some of the many benefits of screw turbine hydro power include:

Hallidays Hydropower International are industry leaders in the field of screw turbine systems.

Innovation is a core tenet of our approach to supplying turnkey hydroelectric solutions. In other words, the professionals at Hallidays Hydropower International are always searching for ways to improve upon existing designs. One example of this methodology can be seen in the potential for high-tech polymer screw turbines to eventually replace traditional steel designs. This revolutionary proposal would reduce hefty fabrication and transportation costs; benefits that will immediately be passed on to the end user. In fact, we are currently in the midst of rigorous testing and applying for proprietary patents in regards to this alternative design.

We have invested significant amounts of money into Research and Development, as we continuously strive to optimise the technology whilst minimisinginstallation and maintenance costs.

Hallidays Hydropower are experts in all phases of the process, from conducting feasibility studies, designing systems, assisting to obtain the necessary licensing, installation and maintenance and are more than happy to assist clients with any or all of these stages.

After installation, we offer emergency callout service, training, remote monitoring, and ongoing performance enhancements. Get in touch with our hydropower team at Hallidays on +44(0)330 1335 505 or hydro@hallidays.com for any assistance.

Our respected team of hydro turbine suppliers at Hallidays Hydropower International are also involved with developing reliable and sustainable energy solutions for portions of the world that do not have reliable access to electricity. We firmly believe that serving the global community is our responsibility as a conscientious provider of hydroelectric energy. Would you like to learn more about our line of hydro turbines or do you have additional questions? If so, it is always possible to contact a knowledgeable customer service specialist. You can also call us on 0330 1331 555 with any enquiries.